Participate in our world-renowned event

On the 4th, 5th & 6th june 2022, the Omnisports Clarens Building will host the new edition of the Montreux Miniature's Show. The committee will provide:

Entrances are free for everyone, come and join us! 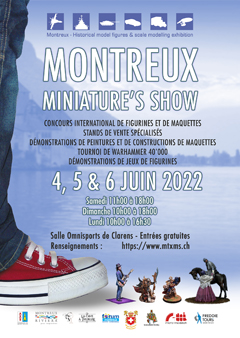 This year, the Montreux Miniature Show hosts several miniature tournaments, namely two tournaments Warhammer 40'000, one, classic, on Saturday and a second, team of 2 players, on Sunday, organized by the association Warhammer Riviera. It is a futuristic battle game in which each player controls an army of figurines, assembled and painted beforehand. The battles take place on war fields specially designed by the players. Modeling occupies a preponderant part just like the game.

In the same way as Warhammer 40'000, but taking place in a fantastic medieval universe, a Warhammer Age of Sigmar tournament is organized on Sunday by the association La Cave à Thurlek.

In addition to these events, Warhammer 40'000 and Warhammer Age of Sigmar introductions will be offered to the public. At the same time, narrative parts will be presented in the universe of the Horus Heresy (futuristic war game set before the events coming from the imaginative Warhammer 40'000).

Finally, enthusiasts will present the game Bolt Action, a board game depicting the battles of the 2nd World War. Here too, each player commands the army he has assembled and painted.